Defeat Your Opponent With The “Zoo Deck”

Defeat Your Opponent With The “Zoo Deck”

A deck that consist of establishing early game or buildings (Huts) and overwhelming the opponent at mid or late with lots of .

So for people who want to see how is Zoo deck look Photo Below : 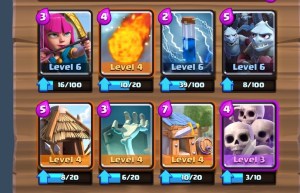 These will save you from like witches and things that do AOE but againsts wizards you will need Skeleton King. Early game when they play a  or try to play a Skeleton King in front of them to make them walk on your bomb .If your using /Minion You will have to either take some damage and play behind or use Spell.

These three buildings right now are the only buildings that deploy but there all very powerful since they can stop the enemies early game deploying like ,,and with AOE or Skeleton King and .

Archers OR anything that shoots air

Anything like Archers that can shoot air will help since 2/3 of your huts are melee and your are trying to have the least damage on them so they will have the highest tank potential when taking a tower through mid to late. There is also like and  that will try to target your melee first so having a ranged minion from behind will help.For more damage to the enemy you can use this slot for .

Zap OR and OR spell

These removal spells will help against early game aggros and reduce the deaths of you have and help removing enemy AOE that make this deck fall really fast like Wizards and  . will stop Wizards and Witches from spawning and or ZAP will stop goblin barrelsfrom dealing maximum damage to your base.

Try to play as many huts and tombstones.If you dont have one in your hand play something cheap until you get a hut or .If opponent is going for early aggro or + / combo play or removal like Skeleton king or small archers.

If you acquired board and his tower is swarmed with ally or its destroyed try to play your and put in the front bridge .Constantly play huts until late game for final spam.

Havent destroyed tower? Start cycling ,,and all you have in your deck.If you destroyed his tower play   in his base so more attack his king tower and enemy will have to kill more also play Archers and your in his base so you have more damage to enemy King Tower and to kill AOE .

Create your own Zoo Deck here.This is a tier list for which are good .